From green field to final testing “ready for the use”: the new automated and refrigerated warehouse of Lesaffre is a reality thanks to Trascar

Trascar S.p.A. > Food > From green field to final testing “ready for the use”: the new automated and refrigerated warehouse of Lesaffre is a reality thanks to Trascar 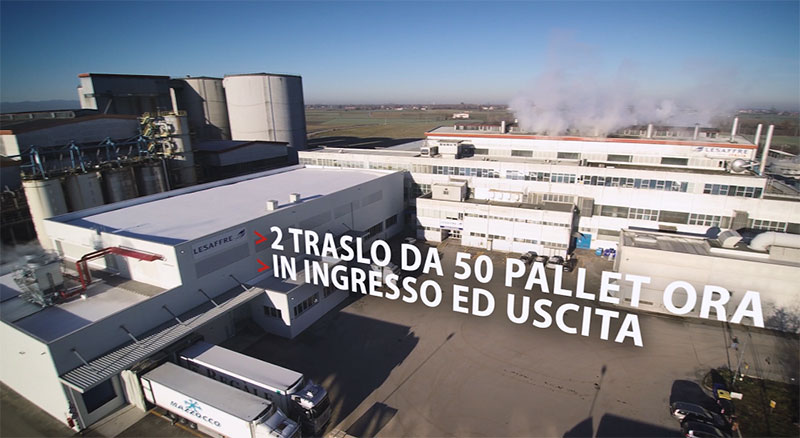 From green field to final testing “ready for the use”: the new automated and refrigerated warehouse of Lesaffre is a reality thanks to Trascar

February 24, 2017 food
The Company of Modena was chosen as main contractor of the new storage complex and handling realized in the province of Parma over an area of 2.400 square meters: Trascar took care of every single planning and execution phase. Lesaffre, the world’s first manufacturer of nutritional yeast, chose Trascar as a technology partner for the realization of its new automated warehouse in a refrigerated room. The Company of Modena, which for several years has started a strong and fruitful collaboration with the French multinational, has in fact managed as main contractor the design and realization of the storage and handling system recently inaugurated in recent days in Trecasali Sissa, in the province of Parma. The system – which covers an area of 2.400 square meters, adjacent to the operational headquarter – is a perfect example of technological excellence: the new automated and digitizer warehouse operates at a constant temperature of 0 degrees, it can handle over 1.600 pallets and it is flanked by shipping area, itself at a controlled temperature. This important realization, of a total value of almost 5 millions euro, has seen Trascar act as a single buyer for all planning and executive phases, not only for the logistics component but also for the construction: from the green field to the final test, in fact, every single aspect was managed and controlled by the Company of Villavara of Bomporto. Thanks to the new automated complex, Lesaffre (a colossus of almost 2 billion euro of turnover, with more than 9.000 employees and 55 operational sites in the world) will benefit from a significant increase in total storage capacity, combined with greater efficiency and safety of loading/unloading operations and shipment of products.   A challenge for Trascar Not only automation of the warehouse, but also building design and realization, refrigerating system and industrial ones (electrical, lighting, smoke detection, etc.). The realization of the new Lesaffre refrigerated warehouse has been a challenge for Trascar: it was necessary to combine different capabilities and to coordinate multiple business areas, in order to ensure the Customer execution uniformity and realization excellence. For the building part Trascar has relied on the subsidiary Studio Leonardo of Bomporto, which took care of the design of the building, organized works and coordinated the safety on site. The new warehouse consists of a shed of 50 x 40 meters, with a useful height of 13 meters: inside can be stocked up to 1.650 pallets on 5 levels. The automated system consists of stacker cranes and lines for machines, capable of handling 100 pallets / hour. Everything takes place at a constant temperature of 0 degrees, a necessary condition to guarantee the perfect conservation of the yeast food product by the Customer. The warehouse is insert in a structure completed by an area used as offices and goods reception.     Integrated technology for an excellent result Trascar insures Lesaffre the taking charge of the actual management of production and the islands of palletizing (already realized in the past by the Company of Modena). A further point of strength of the system is represented by the complete management of the software, both as regards the various functions of the automated warehouse both as ad hoc applications realized by Trascar to ensure integration with managerial programs already used by the Customer. In addition, the automated warehouse is implemented with the management of WMS (Warehouse Management Software) Runner provided by Beta 80, a Company of Milan leader in the sector, with which Trascar has a great collaboration in progress. The production sector and the warehouse are connected by a laser-guided shuttles system. The refrigeration system has a power of 900 kW and is prearranged by chillers with a low ammonia content and glycol cold distribution. A dual-circuit system allows the mutual backup. Last, but very important, is the interfacing of the whole control and supervision system with the management of the Customer (SAP), positioned in the Lesaffre central office in France. Even for this aspect, Trascar with Beta 80 studied in detail the interfacing between SAP and Runner allowing a rapid switch in production, happened by exploiting just a single weekend for the switch-on and obtaining an almost start in production and the full regime over the next week after the switch-on. The result, obtained with this intervention, leads Trascar the confirmation of being able to face complete projects of construction, plants and automations relying on a team characterized by a great trust and experience.
Tags: