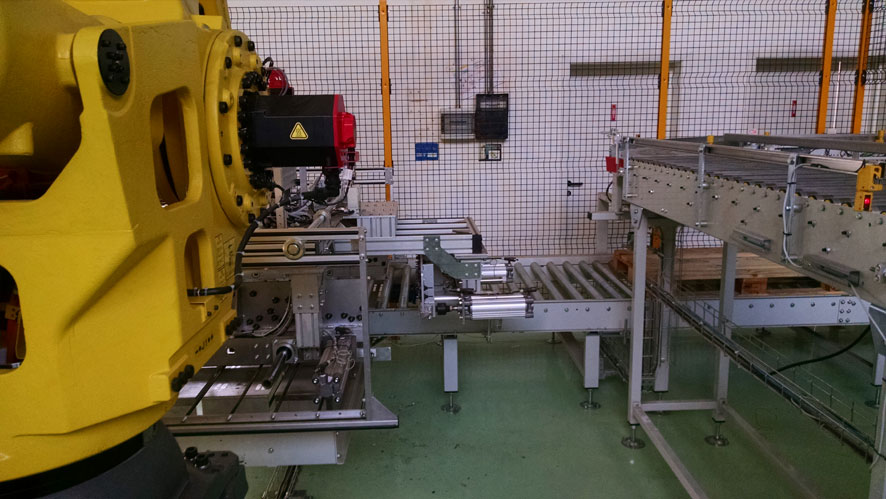 April 24, 2019 others
The system is already functional in the factory of a main international Group: it has a value of almost 2 millions euro, and is composed of three stacker cranes for crates, a robotized depalletizing island and a sorting system with drive rollers conveyors and belt conveyor.   BOMPORTO, April 10th 2019 – The technology provided by Trascar expresses itself with  effectiveness and reliability also in the automotive sector. The Modenese Company has been indeed chosen as technological partner for the automation and the warehouse logistics of a factory of a main international Group, within which are produced high performances propellers. For this important motor Company Trascar realized a high performance mini-load automated intraoperational warehouse, that insures suitable performances standard to the excellence level of the vehicles produced by the Customer.   Industry 4.0 made in Modena The system realized by Trascar has a value of almost 2 millions euro, and is composed of a robotized depalletizing island, a storage automated warehouse with three stacker cranes for crates and a sorting system with drive rollers conveyors and belt conveyor that stokes a loading line served by 8 AGV shuttles (Automated Guided Vehicle). Trascar’s supply included also the realization of the software WMS (Warehouse Management System), customized on the observed requests and interfaced with software programs already in use by the Customer. The steady interconnection among the different divisions of the factory and among the functions that take place upstream and downstream of the warehouse, the accuracy of the connection carried out and the efficiency about the management of the loading/exit flows of the mechanical parts produced, turn the system realized by Trascar a perfect example of 4.0 Industry.   Customized technology for excellent performances The depalletizing robotized system has been customized, taking into account the specific performances and dimensions requirements showed by the Customer.  The pallets arrive in this factory area with the rhythm of one every two minutes: each pallet is composed of an established number of plastic crates, stacked in more layers, within them are placed mechanical components  directed to the various production lines. The incoming pallet is detected through an optical reading system (barcode reader): the barcode identifies its origin, contents and destination. Pallets are equipped with plastic material cover, because it is took away from the robot and sent to another factory’s area for the following reuse. Once opened the pallet, one pick up layer gripper collect the crates (until a maximum of 16 for every handled layer) and lodge them on one conveyor-line, where they will be thereafter separated. The capability of the gripper consists in picking up a layer every 15 seconds. Crates’ number, dimensions and weight are changeable, so it was necessary to program the robot so that each operation is executed with the maximum efficiency and in the shortest time possible. The gripper was provided of spring detectors that adapt its picking according to the crates’ real dimensions.   From the pallet to the two warehouses, to the working divisions A deviation devices system individualizes the crates and conveys them, through drive rollers conveyors, towards the entrance of the storage warehouse: here the crates are directed to one of the three stacker cranes, following the specific destinations planned by the WMS. The warehouse has a high capacity of crates storage, each of them can weigh from few grams to a maximum of 50 kg, depending on the mechanical parts contained. Each stacker crane is able to handle until 150 crates/hour, with a warehouse overall capacity 450 crates/hour. From this place, according to the working requests pointed out by the central information system, the crates with mechanical parts are afterwards directed to the sorting area. Here are directed also the components produced by external suppliers: in this case each part is singularly assembled on suitable supports (skid). One line of 16 driver rollers conveyors and belt conveyors handles crates and skid on an exit line, where they are distributed along 8 loading bays according to a single regulation. Every bay is served by an AGV shuttle, that conveys the mechanical parts to the related assembling division, each of them composed by semi automated lines. The shuttles work at the same time on two levels, carrying out whether the lading of the parts addressed to manufacturing or the unloading of the empties crates and skid coming from the assembly lines. The exit line has a maximum capacity of 600 crates/skid per hour. The automated system realized by Trascar is also provided of mechanical and luminous equipments, to regulate as well as possible the handling’s phases of the workers and to optimize the execution times.
Tags: